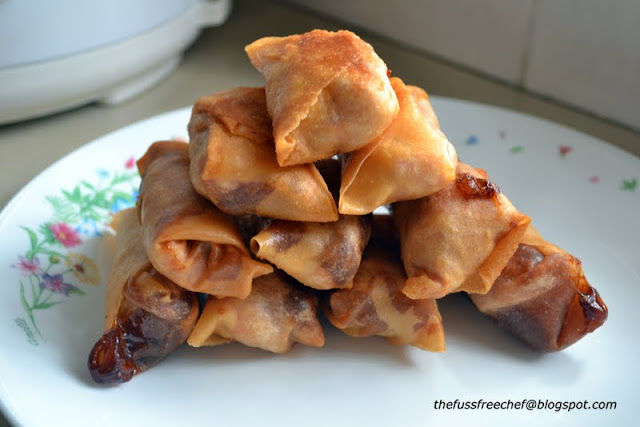 I love nian gaos, but it's getting harder and harder to find good quality ones.

For the past few years, i would receive nian gaos wrapped in banana leaves from well meaning friends during every chinese new year. And the subsequent cny, the poor fellas would still be in my fridge and i would then have the excuse to throw em away because they've all turned hard as rocks.

Why do i do that? Because its such a hassle to fry the thing. Steaming it plain just doesn't cut it. I dread anything to do with frying.  Frying fish, that's once every six months.  Deep frying, once every ten years.

So it must have been a decade since my last deep fry :P.  Honestly i really can't remember when was the last time. It's probable that i actually have never done it before. Anyways, this year my MIL gave me some freshly made nian gaos which smelled very fragrant.  They were still wobbly, wrapped in banana leaves.  Since i have not had my fix of good fried nian gaos for eons, i decided to take the plunge, using the recipe from Table for 2..or more.  Thanks Wendy for the wonderfully simple recipe. I tweaked it a little bit, and it turned out super delicious. Gave some to my neighbours and brought some to cell meeting that night. Everyone loves it.

1. Cut the nian gao into long strips of about 2 inches long.

2. Slice the yam thinly, then steam until soft. Mash evenly.

3. Smear some yam paste onto each popiah skin, then put one strip of nian gao on top.

4. Fold into a small spring roll, dab the end corner with some water and fold onto the roll, pressing firmly so the corner will stick. Continue until all the yam and nian gao is used up.

5. Heat the oil until it reaches deep frying temperature. Use a wooden chopstick, dip it into the oil, and when u see bubbles coming out from the chopstick, that means the oil temperature is right for frying.  If the oil is emitting smoke, it means it is already too hot.

6. Gently drop each roll into the oil. Be careful not to overcrowd the wok as this would lower the temperature of the oil and the rolls would not fry evenly. Since i am using a medium size wok, i fry a batch of 5 rolls at a time.


7. When the rolls turned golden brown, take them out and dry on absorbent paper. Serve warm when the rolls are still crispy. 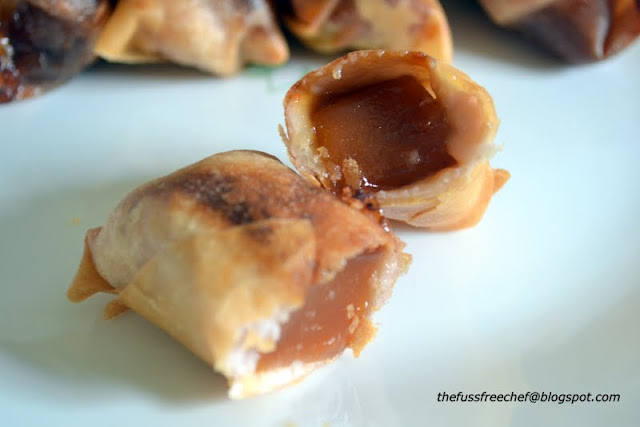 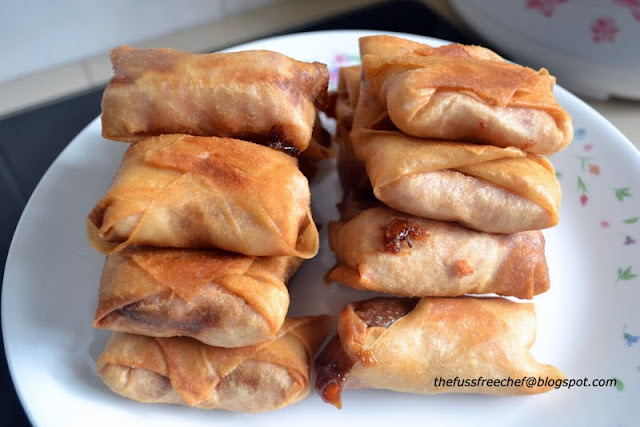 Posted by Esther@thefussfreechef at 4:52 pm