Blanched Beansprouts ala Ipoh style, with a twist! 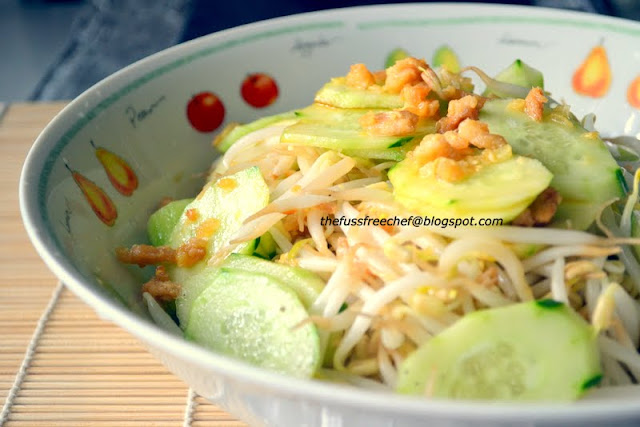 This is such a humble recipe that I am almost too shy to post about! But it is very simple to prepare and so appetising that I felt it would be such a shame not to mention about it.
Hubby had to travel to Penang for some work matters, so mummy and son decided to tag along and drop by our hometown, Ipoh for a few nights, just to chill and eat some good Ipoh food.
And boy did we eat! I also carted back loads of goodies, including several packs of the famous salt baked chicken, heong piah and an ice box filled with frozen seafood, courtesy of my MIL.  I also asked her to buy me a big packet of Ipoh beansprouts (yea, those fat little juicy shorties!) so that I can make this side dish.
The twist in this recipe is the addition of lime juice. I got this idea from a popular restaurant in Ipoh, where they served their steamed mince pork dish with a generous squeeze of lime juice.  This little addition instantly transform an otherwise ordinary dish into something that really perks up the palate. The key is to use ripe limes.  I've tried it with lemon juice, it still tastes good but it's better with ripened lime. 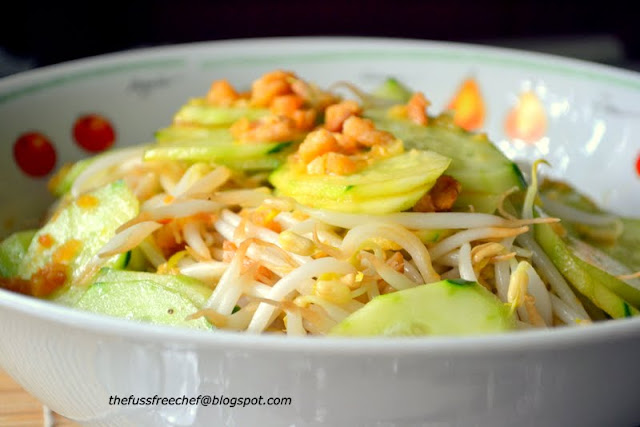 Blanched Beansprouts ala Ipoh style, with a twist!

1. To minimise washing up, choose a deep saucepan that can do double duty - fry the aromatics and also deep enough to blanch the beansprouts. Fry the salted fish and garlic with the cooking oil and sesame oil until light golden color. Set aside (make sure to scrape all the precious oils from the pan - it has a wonderful flavour to coat the sprouts).

2. Put sufficient water in the same pan to boil. Once the water is at a rolling boil, pour all the beansprouts into the pot and turn off the fire.  Add a dash of chinese cooking wine to the water to get rid of that grassy/fishy smell from the sprouts.  Give the sprouts a few stir and pour everything into a colander. Drain off the excess liquid from the sprouts, and put into a deep dish.

3. Mix the seasonings with the beansprouts and cucumber, and serve immediately.

Posted by Esther@thefussfreechef at 12:40 pm