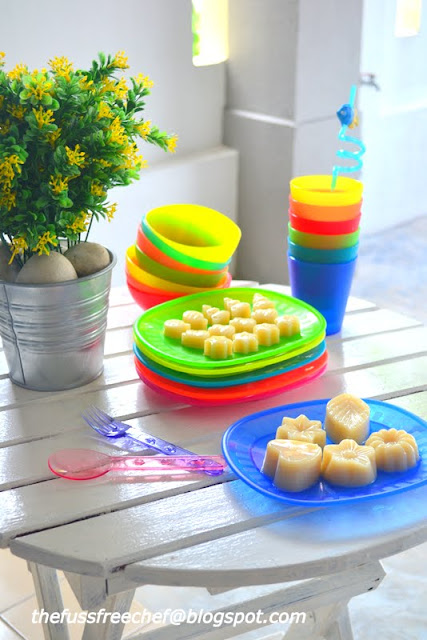 It's school holidays now, and that means mummy has to work harder to keep the little one entertained at home.

Can't be hitting the malls everyday or watching dvds all the time or playing games on the ipad non-stop.  Although I did allow my son generous amount of time for all the above this holiday as he isn't allowed any "screen time" during school days.  Gotta be balanced and fair right?!

I told my son we will have a little project every day of the holiday.  So today's project was making jelly for a little tea party. Mummy and son trooped to the supermarket and bought a few packets of agar-agar powder and soya bean drink.  This is something really easy that kids will enjoy making, except the part when we boiled the mixture and pour the hot stuff into the moulds.  Here mummy took over.

Once the jelly's chilled and ready, we brought out all the ikea children's bowls and cups and had a little party at the car porch, complete with cookies and packet juices.

Soya Jelly
1. Pour 900ml of the soya drink into a saucepan and bring to a boil.

2. In the meantime, pour the remaining 100ml liquid into a small bowl, add the agar-agar powder, stir to dissolve evenly.

3.  Once the liquid in the saucepan is boiling, pour the agar-agar mixture into the pan and add the sugar.  Stir gently and continuously for about 30sec, making sure that there are no lumps.

4.  Turn off the fire and pour the mixture into jelly moulds.  Place the hot moulds under a strong fan for 10 minutes to cool before putting them into the fridge to  set and chill for at least 2-3 hours.

You can substitute the soya drink with other preferred liquid such as fruit cordial, although i wouldn't recommend using fresh juice as boiling the juice would destroy all the vitamin C.  An alternative is to use fresh fruit pieces.  Boil the water and the agar agar, then at the last minute, stir in the fruit pieces and immediately pour into the moulds. 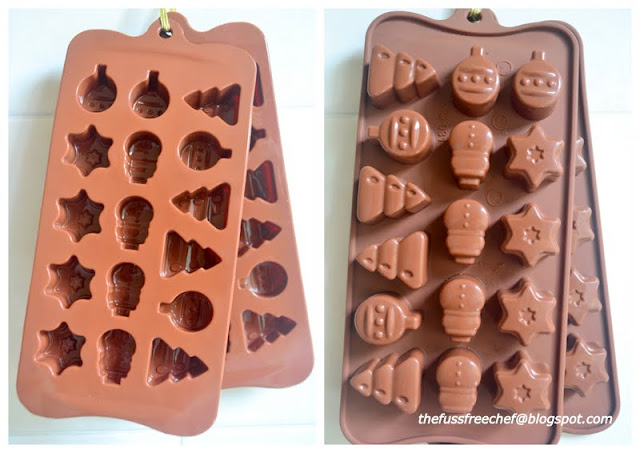 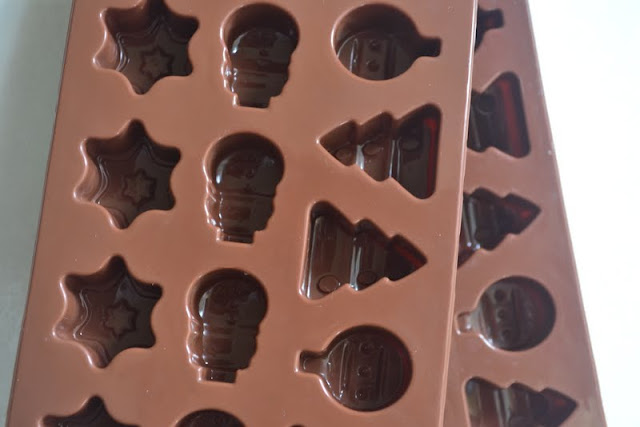 I bought these silicone moulds in Hong Kong a few months ago. I always have a niggling phobia about using the regular plastic moulds given that we're pouring boiling hot mixture into them.

It said on the back of the moulds that it can withstand temperatures between 250celcius and minus 20celcius.  Wow.  After conversion, it cost rm$7 each. Not sure if it's cheaper here as I haven't seen any around.  Cute aren't they?  Love the details on them, especially the indentations. 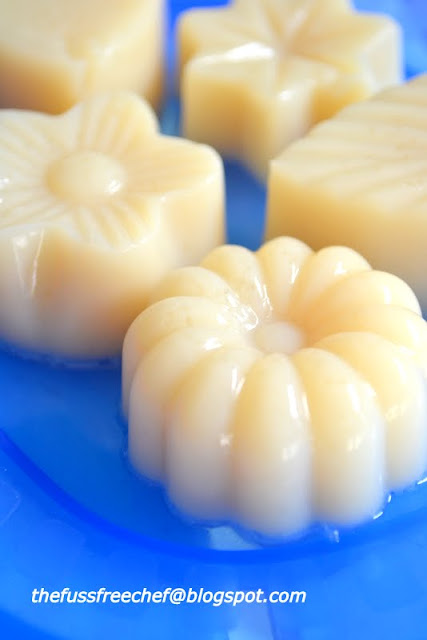 Posted by Esther@thefussfreechef at 11:36 pm