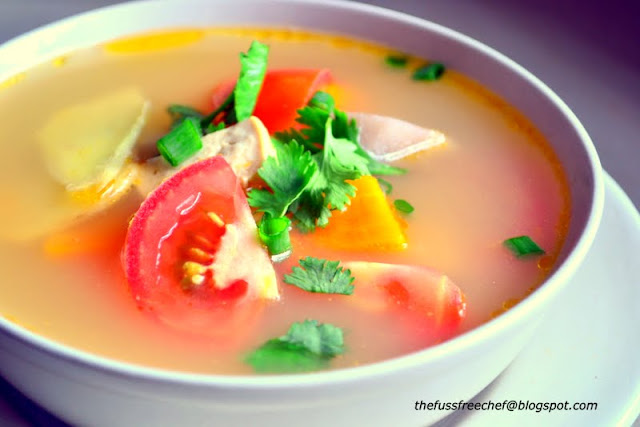 I first got the idea of adding yam to soups when i tasted this super yummy fish soup at Putien, the Heng Hwa restaurant made famous by its parent branch from Singapore.

The broth was extremely flavourful, and i suspect quite heaty too, as whilst i was sipping the soup, i could feel the warmth flowing through my body. The yam added a nice earthy taste to the soup. Besides fish and loads of ginger, I am guessing the other ingredients could be chicken or pork bones (the soup has "body"), whole black pepper, spring onion, tong kwai and a potent amount of chinese wine.
Mine is a lighter, non herbally version as i wanted something that is not heaty and kid-friendly.  I bought a nice big garoupa head from the supermarket, and asked the guy to chop the fish head into 9 pieces, 5 of which i used for this soup. The other 4 meatier pieces went into the freezer, for an assam fish head recipe at a later date. 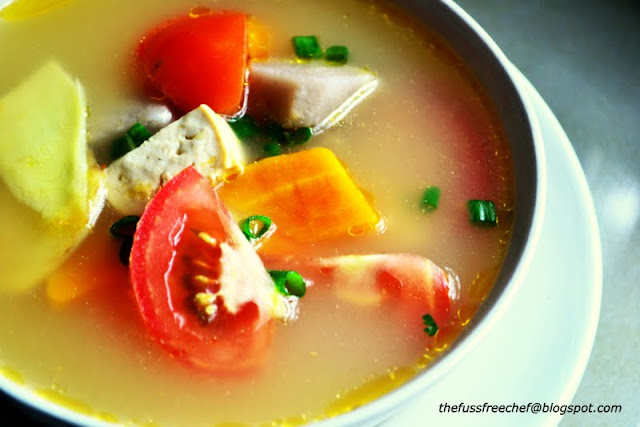 Fish Head Soup with Yam
1. Put the water to boil2. In a separate soup pot, heat both the oil and fry the ginger until fragrant. Add the fish head pieces and fry till light golden on both sides.  Drain on absorbent paper. 3. Pour the boiling water into the soup pot, add the rest of the ingredients and bring to a boil. Occassionally skim away the excess oil and scum.  Turn down the fire and let simmer for 1 and half hours.  Stir occassionally. 4. Season with salt and pepper to taste. Turn off the fire and let the soup sit for another 20 min before serving.
Note: if you want the soup to have that milky white appearance, it is essential to fry the fish on high heat until golden brown and cooked on both sides.  I only did a light fry as I didn't want the soup to be too oily, as such, it only took on a light opaque colour instead of milky white. 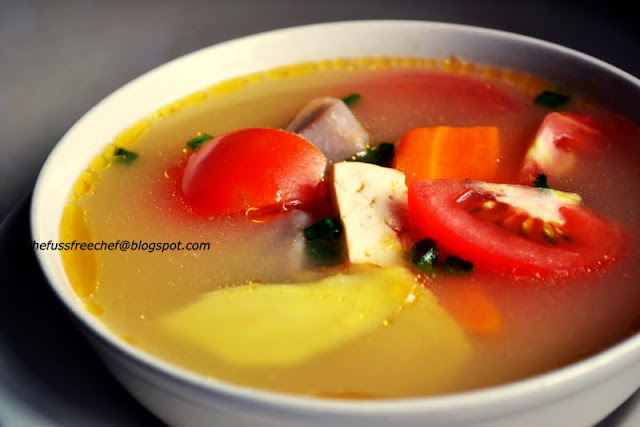 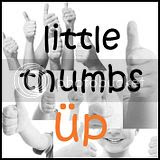 This post is linked with the event Little Thumbs Up organised by Zoe of Bake for Happy Kids and Doreen of My Favourite DIY
Posted by Esther@thefussfreechef at 2:45 pm