Travelling on the First Coach to Singapore 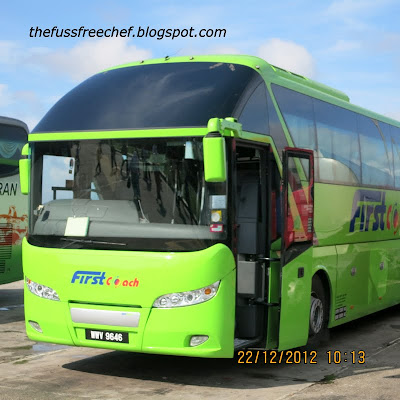 We went down to Singapore over the Christmas break for a short family getaway.  Since we decided on this trip pretty much at the last minute, going by air was out of the question as fares were exhorbitant.  We decided to take the coach, and since First Coach departs from Subang Parade (which is nearby our house), that seemed the best option.


Despite the peak season, ticket prices were very reasonable - adult fare was RM$50 one way and child RM$38; much cheaper than Aeroline.

Since the journey takes about 5 hours, we took the earliest coach which departs at 7.45am, reaching the Singaporean custom checkpoint at 12.15pm.  We reached the Plaza on Beach Road at about 1pm.  The coach was in tip top, spanking clean condition.  Looking at the number plate, it's probably brand new. Seats are comfortable and spacious, with extended leg rest and foot rest.  They also provide a bottle of mineral water and some snacks for each passenger.  There was also a disposable plastic bag in each seat netting, which i thought was very thoughful, and certainly helps minimise mess in the coach.  Total number of seats is only about 25, so you are not cramming into a sardine can.   In fact, the space between your seat and the front seat is unusually long, perfect for those 6footer.  My feet can barely touch the footrest when i sit upright. 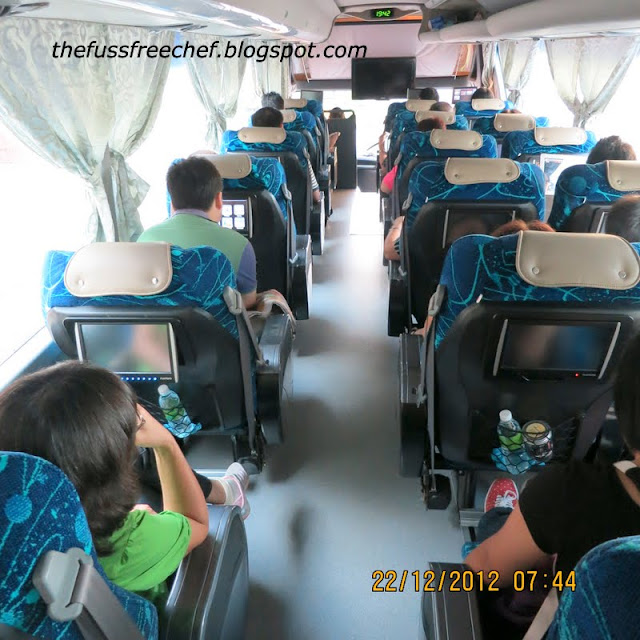 I normally do not like long distance coach travel, but this time the journey was made much more pleasant with this... 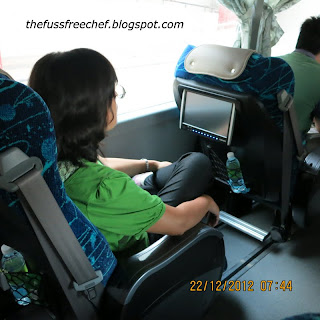 Yeah, an on-board video entertainment system, one person to his own screen. Mind you, its a very decent ipad size screen.  There are plenty of choices - movies (6 genres including comedy, action, drama, chinese movies, animation, romance), games, music, and some other options.  The movies are also pretty current - they even have Casino Royale and Slumdog Millionaire.  Its all touch screen and pretty snazzy. Stick in a pair of headphones and you're good to go.
The only bummer is they DO NOT provide free headphones.  Yup, you have to buy them, at RM 15 a pair.  I noticed  some passengers brought their own, so i guess they must have travelled on the coach before or others have told them about this.  We were kiamsiap, so we didnt buy.  Instead, hubby's brother (whom we stayed with in Singapore) gave us some used headphones so we used them on the return journey. 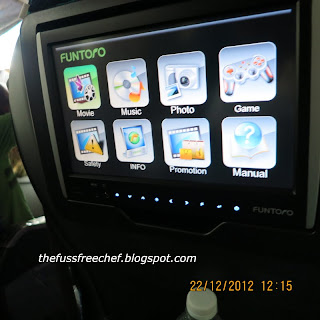 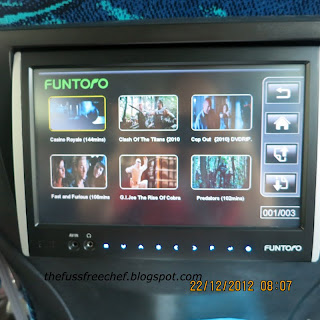 So now you can potentially have a movie marathon throughout the entire journey, which was what my son did!  He watched three of his favourite movies - Ice Age 2 and 3, and Despicable Me.  Then he watched them again on the return journey.  Between this and two packs of the Shell petrol racing car Lego sets (which we bought for him in anticipation of the long journey), it kept him well entertained.

There are no toilets at the Subang Parade ticketing office cum waiting area, but the journey had two pitstops.  One was a lightning stop 10min into the journey at a petrol station, and the other a 20min stop at the Pagoh rest area halfway through the journey.  Most long distance coaches also make their pitstop here so the place was teeming with people. The foodcourt comprises all Malay stalls, with tummy rumbling aromas of mee rebus, lontong, ayam goreng and loads of steaming paus, crackers and cut fruits.  We bought some curry puffs, they were only 70cents a piece, decent size, chocked full of fluffy potatoes and fiery hot!

Overall, it was a very pleasant, relaxing and comfortable journey, much to my relief.  The coach departed on time and reached its destination within reasonable time too.  Ticket prices are reasonable.  Arrival point at the Plaza is also convenient for taking taxis to your final destination on the island.

Posted by Esther@thefussfreechef at 3:24 am