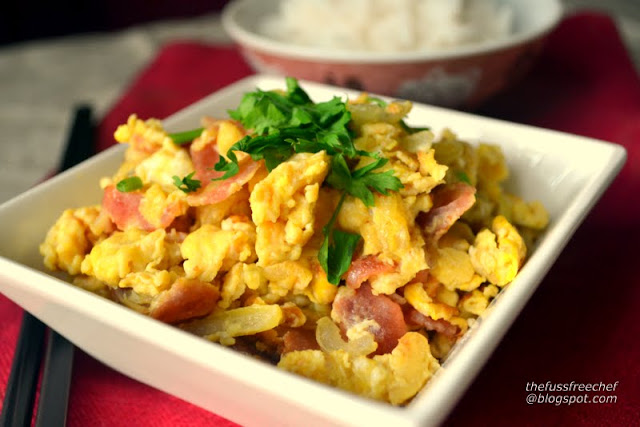 This is really a no-brainer recipe.  I am pretty sure every Chinese home will have this on the dinner menu once in a while.  It is a flavourful, comforting, quick and easy dish that embodies the simplicity of typical Chinese home cook food.

During his recent business trip to Hong Kong, i asked hubby to buy one packet of the famous Wing Fung brand of chinese sausages.  He came back with FOUR.

Under normal circumstances, i probably wouldn't bat an eyelid; men right, you don't really expect them to follow instructions to a T.

However, in this case, these preserved porcine guys cost 10 bucks EACH.  Not 10bucks per packet, but 10bucks per stick! The total bill for sixteen sausages (four in a pack) came to a whopping 160 bucks. I nearly had a heart attack when hubby showed me the receipt.
The saving grace is these guys are really yummy (they'd better be). I put two sticks into the rice cooker in the middle of the cooking, and the smell that wafted through was really fragrant, especially the chinese wine.  It's obvious they use quality ingredients. 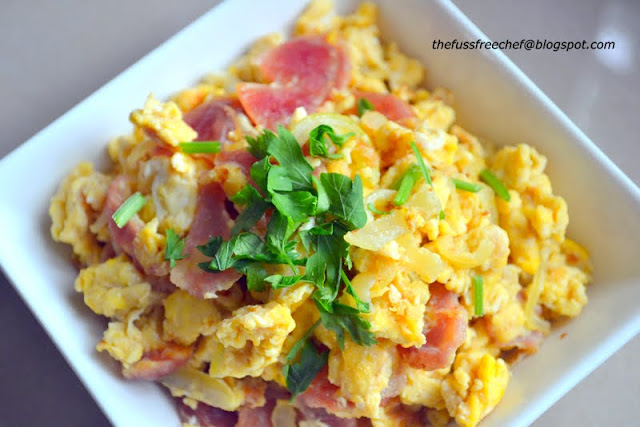 For this recipe, i sliced the sausages really thin, and fry with equally thin slices of onion. Crack four eggs on top, scramble up everything and it's ready. The fragrant chinese wine made a big difference to this simple dish. 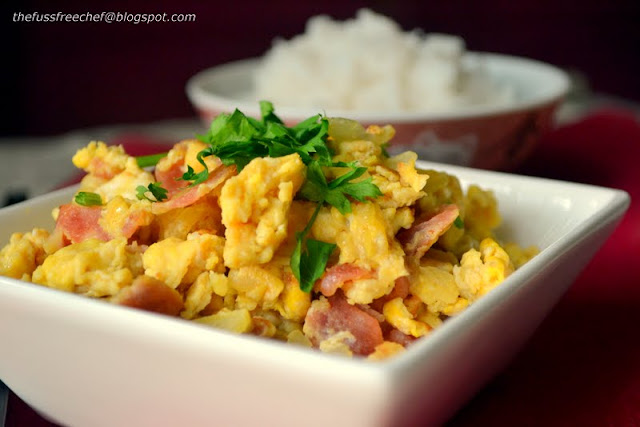 Scramble Eggs with Chinese Sausages and Onion
1. Heat 1 tspn of oil in a frying pan, and pour the sausages and onion to fry. You don't need much oil as the oil from the sausages will flow out when it is being cooked.
2. Fry for a minute until the onion turns soft and the sausages start to sizzle. Add the beaten eggs and stir until cooked. Turn off the fire and serve immediately.

Posted by Esther@thefussfreechef at 1:56 pm